Unfortunately, there are almost 600 individual "tiny" scheduled "snippets" of coverage, as provided by SD. They cover short time periods of as small as 30 minutes up to large blocks of maybe 8 hours (e.g. for Tennis on OLY). It is extremely clumsy and an unbelievable recording and playback nightmare, to try and watch anything with some continuity. It's impossible to figure out what's live, what's replay/encore (if there is such a thing), etc.

This is in dramatic contrast to how scheduled coverage shows up on TitanTV, for channels like NBCSN and USA which have effectively been turned over to 24/7 ongoing coverage.

For example, here's what TitanTV looks like for NBCSN (314) for the upcoming 3 days. Note the large blocks of programming (as expected to be human-friendly) representing continuous hours at a time: 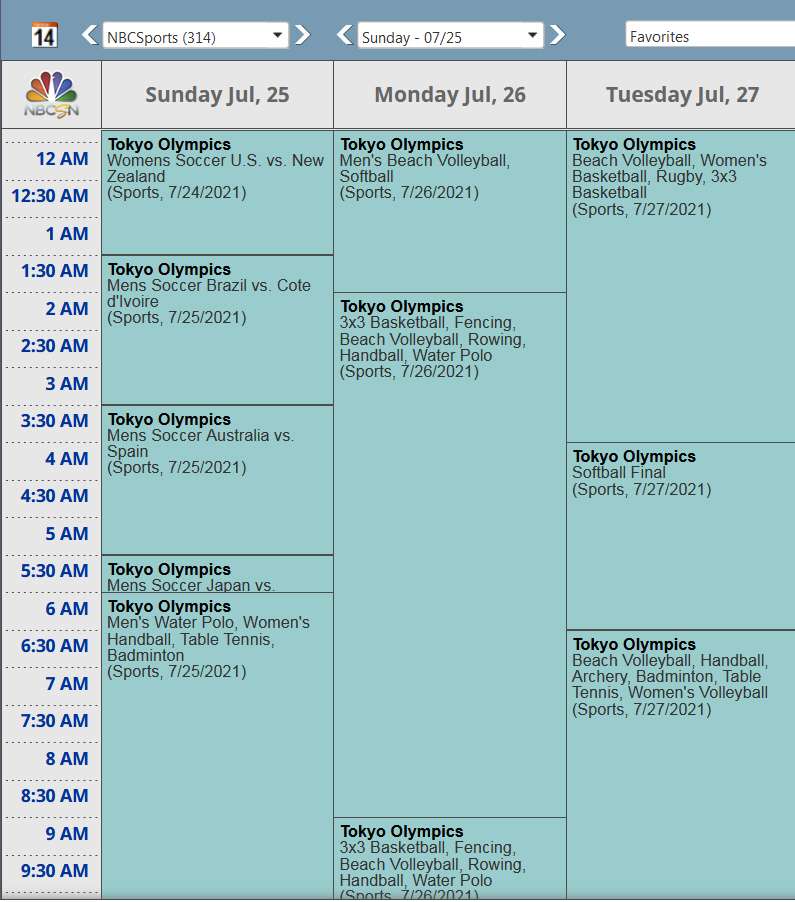 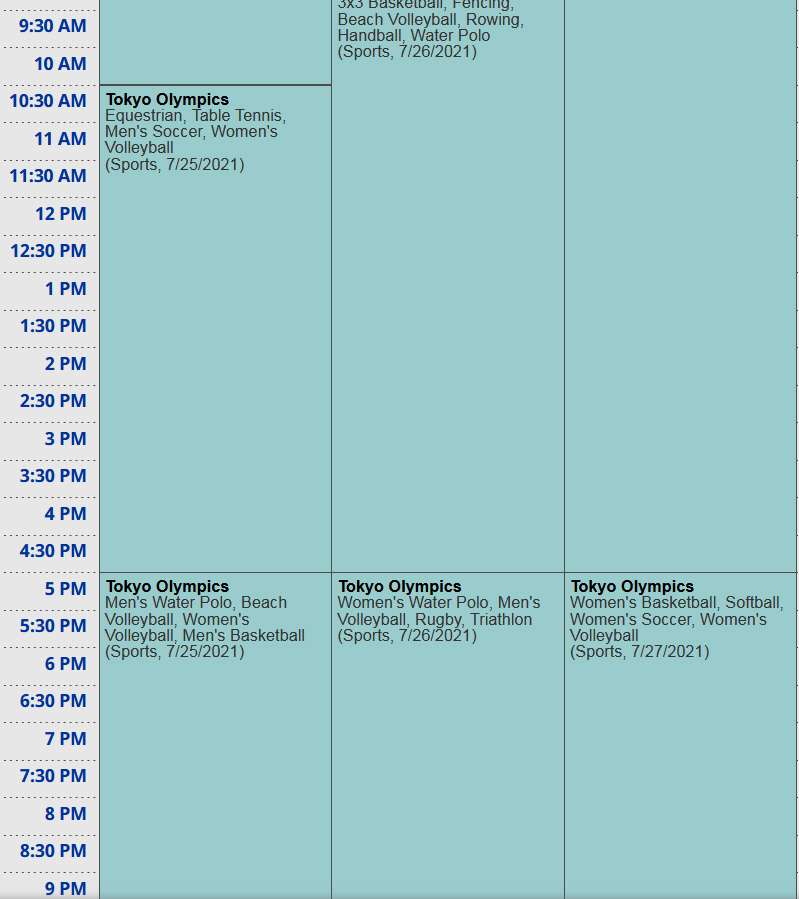 In contrast, here is what WMC Guide looks like for NBCSN as provided by SD. Note that there are 303 upcoming separate "programs" scheduled just for NBCSN!!! They range in duration from as short as 30 or 45 minutes up to an hour or two. Ridiculous!! Multiply that by the many NBC channels and it is overwhelming! It will be an unbelievable task to try and watch these, in chronological sequence for one-channel-at-a-time, with thousands of "sprayed" simultaneous recordings from all the channels covering ongoing continuous real time across all these channels. 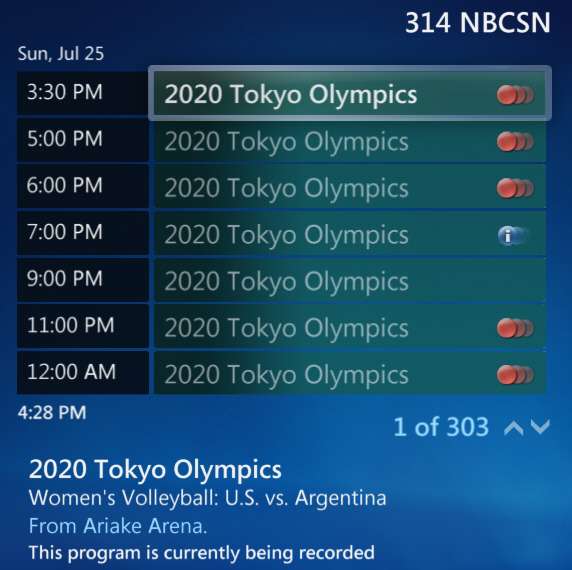 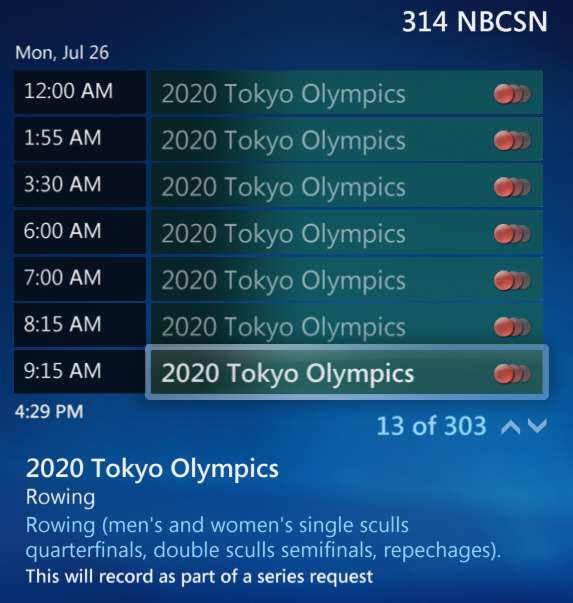 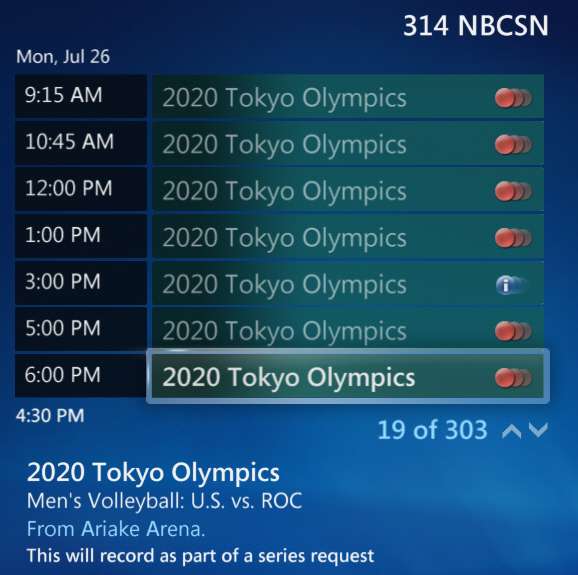 Am I the only one trying to cope with this mess??
Top 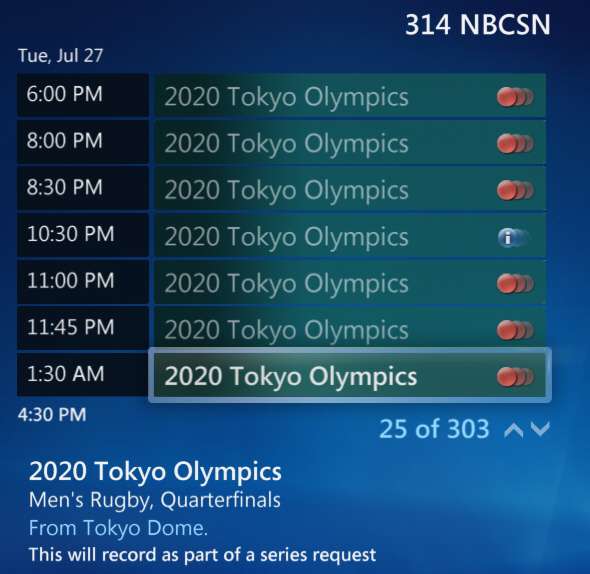 I don't think I agree.

The TitanTV schedule seems to just be blocks with a general description of what is on during the block. SD tries to give you more specific information about what is on and when it's on.

It shows when replays of particular games are on, etc.

I like the smaller blocks as it makes it easier to watch them, then delete them to make room for more recordings. Having to watch a 7+ hour recording before being able to fee up the space is a bit crazy, plus if you only want a particular game that is scheduled during that block you can't easily just record that segment.

In any case, the schedule is constantly changing, so having accurate guide data is going to be hit or miss, but so far it's been fairly accurate for me. If I had to choose short recordings of say 1-2 hours over long 7 hour recordings, I would definitely choose the shorter ones.

Note that I only have four of the channels (NBC, NBCSN, CNBC, USA), so I don't have to deal with GOLF or OLYMPIC channels in the mix, and I only have 3 tuners, so conflicts make me have to choose what I want to miss in a few places, but in general it works, as long as I keep watching/deleting the videos to fee up space so I don't run out.

So I guess it's just personal preference as well as practicality. Having to retain/record a 7-8 hour segment because you want to watch the segment that starts at the 30 minute mark and ends at the 1:30 mark is not very efficient.
Top

I understand this 24/7 coverage is largely "live" and unpredictable. But having individual program guide segments (e.g. on USA) that typically run consecutive 30-90 minutes in length throughout the entire day, with supposed descriptions of the type of coverage contained therein... well, it's mostly inaccurate and therefore mostly nonsensical.

For example, this morning's (7/26) 75-minute USA segment airing from 9AM -10:15AM (PDT) was titled "Table Tennis, Surfing" and "described" in the synopsis as "coverage of the mixed doubles bronze and gold medal matches from Tokyo Metropolitan Gymnasium, and the surf report". That's the theory.

Finally, 59 minutes into the 75 minute "program" they "cut to the beach, for the most anticipated surfing debut" of a USA vs. USA surfing match. One minute later it was over! Of course appropriate advert pods.

Cut to mountain biking for the final 10 minutes of the 75-minute program (actually about 5 minutes of adverts).

==> NO TABLE TENNIS, and exactly 30-seconds of one surfing activity.

I have a second HTPC (with its own 6-tuner Ceton ETH as well as its own 4-tuner Hauppauge HD-Quad OTA/ATSC tuner) that used to be my production machine but has since been replace, which I have now re-activated specifically to record just "2020 Tokyo Olympics" but specifically ONLY on the USA channel as it appears to have been assigned 24/7 service. That way all of the programs in that title are recorded in chronological order, so that at least I can play them back consecutively and easily (since that is the only channel producing recordings).

But honestly, the "description" is not accurate and/or barely helpful. It's not useful to selecting what you might want to watch to see a particular sport or event. I understand this, and I understand NBC sells advertising which is why it is free for us to watch. But I'd just as soon have 2-4 hour blocks of unpredictable but probable event coverage and just let it play (or fast-forward through) to at least make it relatively convenient to watch after it's been recorded. Fighting through 30-75 minute mini-blocks is annoying, compounded even more if I had been recording many simultaneous channels on the one HTPC.
Top

Simply could not deal with this scheduling/playback nightmare, especially when it was almost always 90% inaccurate anyway. Might as well just turn the channel on and watch it continuously, and just enjoy whatever they happen to air, live, previously aired, repeat/encore, etc.

So that's what I've now done. I've deleted ALL of the series recordings previously scheduled for channels 101 (USA) and 314 (NBCSN), since they've been purposed by NBC to be 24/7 delivery channels for Olympics events, either as they occur live in Japan (all heats and finals, live and complete, before selected glamour events get edited down and rebroadcast in USA night prime time on NBC-DT, mostly emphasizing USA athletes), or whenever they have spare time between events and show repeats/encores or other events that were televised were occurring simultaneously with these secondary events. That's how they produce content for secondary channels, is to rebroadcast on some other channel an event previously aired live on one of the other channels. That's lots of what NBCSN is showing, encores of stuff previously aired on some other channel.

I've left all the remaining "series" recordings for "2020 Tokyo Olympics" as they are, for all the other NBC channels. So NBC-DT is picked up by my Hauppauge Quad-HD OTA/ATSC 4-tuners card, according to the Guide. Same with GOLF, CNBC, and OLY. Only things not recorded for "series" via Guide is everything that's on channels 101 and 314.

Instead, for channels 101 and 314 I've created 8 manual "EVERY DAY" 3-hour "channel/time" recordings for each channel, running all day long to give me 24-hour coverage for each channel in blocks of 3-hour recordings. So no matter what's on and no matter when it started, on either of those channels, I will have 100% coverage recording. And I can play it back on either channel in 3-hour chunks. I can FF or skip whole events if I want to, just doing it manually with the remote.

To avoid pressure on my 6-tuner Ceton when other things might need to be recorded I've staggered the start times of the 8 3-hour recordings for channels 101 and 314, and also ended each 3-hour block 1 minute earily (i.e. at xx:59). I don't know if that really was necessary or even helpful, at the cost of guaranteed loss of that final minute of every 3-hour recording. But I've had so much problem (i.e. WMC lockup perhaps because of signal strength issues and 101 tuning problems) and instability this week trying to recording all 6 channels via the Guide that I'm doing anything I can now to reduce pressure on my HTPC.

Honestly this 8 generically named recordings per day for fixed time slots on each channel 101 and 314 (which is 24/7 Olympics anyway) is no more or less helpful than the many many hundreds of randomly sized and named recordings with nearly worthless synopsis descriptions (previously provided to SD) since NBC is seemingly deciding ON THE FLY what they air on any channel, depending on the situation at that moment and how long that coverage might go. In fact, I'm of the opinion that 8x3-hour blocks of recordings organized by channel for these two 24/7 Olympics channels is probably the easiest and best way to both record and play back.

Of course it will take many months to watch all of this stuff. I think I saw that NBC was airing 7000 hours on TV and streaming on Peacock (which I have no interest in). I suppose 100% of everything is available on NBCOLYMPICS.COM but I am not interested in utilizing that resource. The events I'm interested in watching are covered on TV somewhere, sometime.
Top
Post Reply
6 posts • Page 1 of 1
Powered by phpBB® Forum Software © phpBB Limited.
This website is not affiliated with Microsoft. All Windows and Media Center logos and trademarks are the property of Microsoft Corporation.