So my wife and I recently closed on our first house, while that was exciting in and of itself it also meant that I would have the opportunity for a new media setup. Our old setup( http://thegreenbutton.tv/forums/viewtop ... f=15&t=210) had served us well for several years , but it was time to expand.

The current setup consists of the following:

Ok so now for the fun part the pictures. 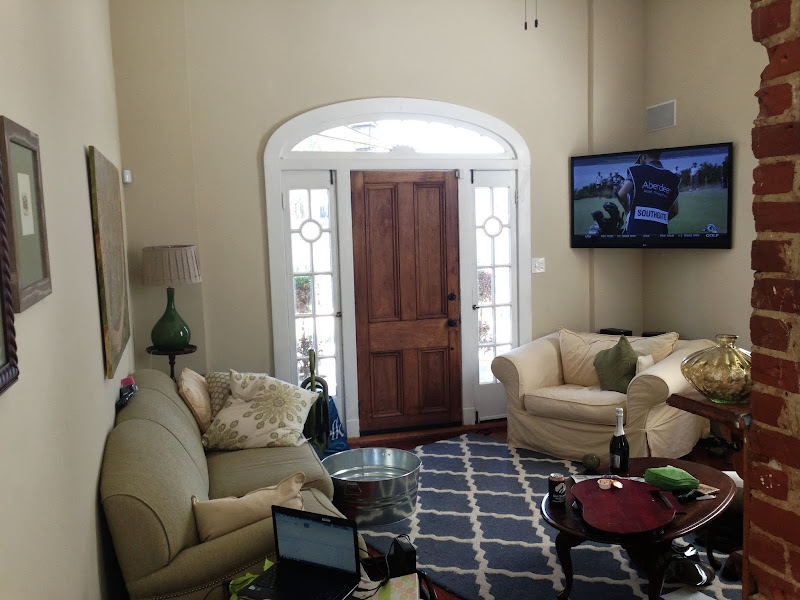 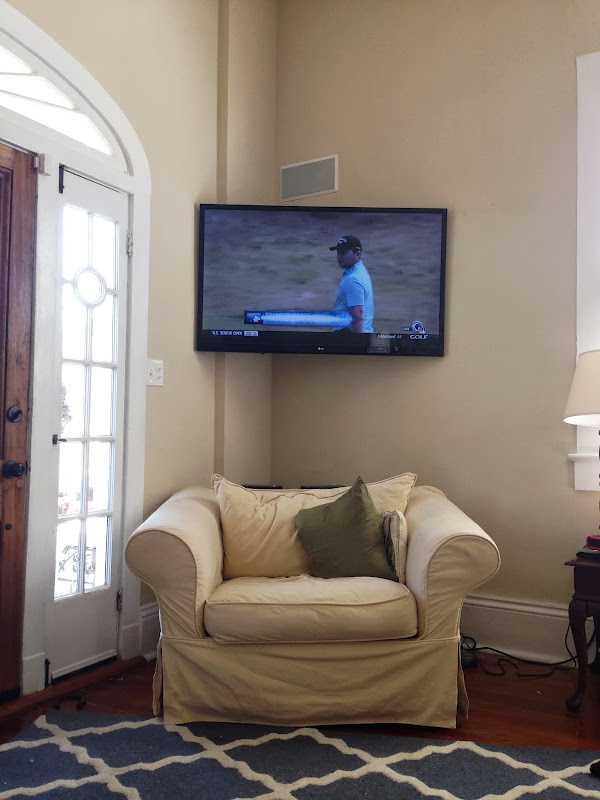 This is the view from the main seating area. Here you can see the TV which is an LG 55LM4600 55" 1080p 120Hz 3D LED mounted on the wall using the Designer Habitat Ultra Slim Cantilever Swivel & Tilt Wall Mount TV Bracket. At $30.00 the mounting bracket is a bargain compared to other wall mounting solutions I looked at and one that I would highly recommend. You can also see the center channel speaker which is a Micca M-CS Dual 5.25 Inch 2-Way MTM In-Wall Speakers with Pivoting 1" Silk Dome Tweeter. I am sure the audiophiles here are already thinking “where are your left and right channel speakers?” For that we must move the one and a half chair below the TV out of the way which reveals…. 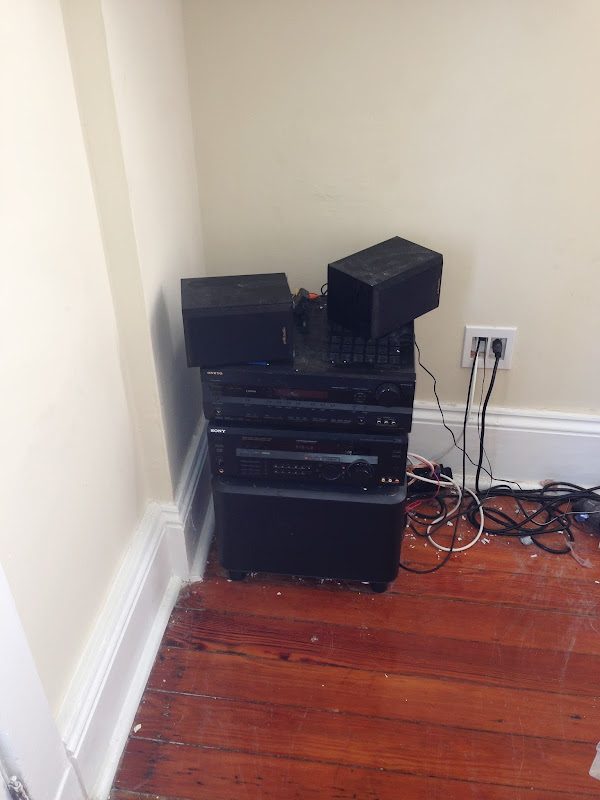 Here you can see the right and left channel speakers sitting on top of the Onkyo TX-SR506 which powers the media room. The right and left speaker placement is temporary and will eventually be replaced by in-wall speakers on the left and right of the television. Below the Onkyo is a Sony STR-DE835 which powers the whole home audio (currently just the master bedroom and kitchen, but will soon be expanding to back porch and 2 upstairs bedrooms). I have the audio from the HTPC output over digital optical audio and converted to digital coax that is split into each receiver. This way I can have the HTPC audio source placing at the same time in each zone. In addition, the second receiver allows for independent volume control between the living room and the other zones. The Sony receiver is sitting on top of a passive subwoofer. I don’t know the model or specs of it as it was a hand me down from my father in law. It originally came with the Sony STR-DE835 as part of a HTIB kit. But it has no markings to indicate anything else.

A close up view of the two receivers: 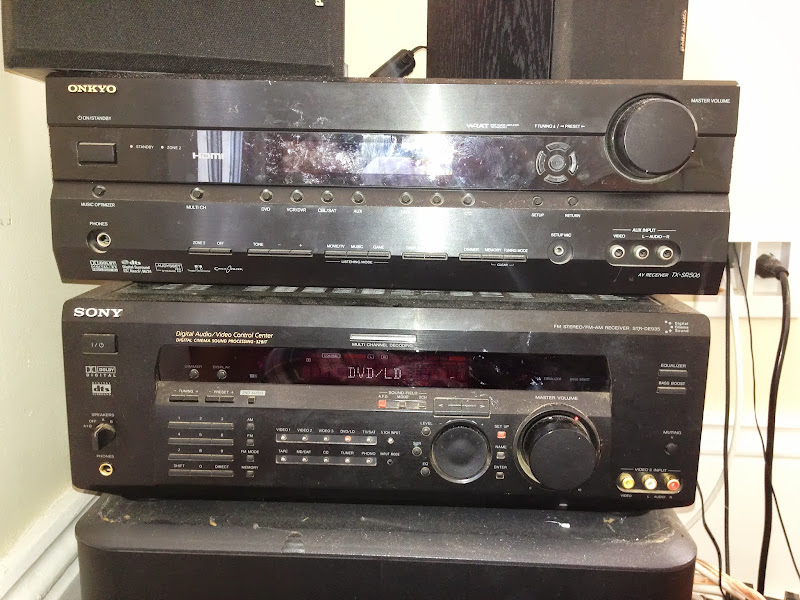 View of the back of the receivers: 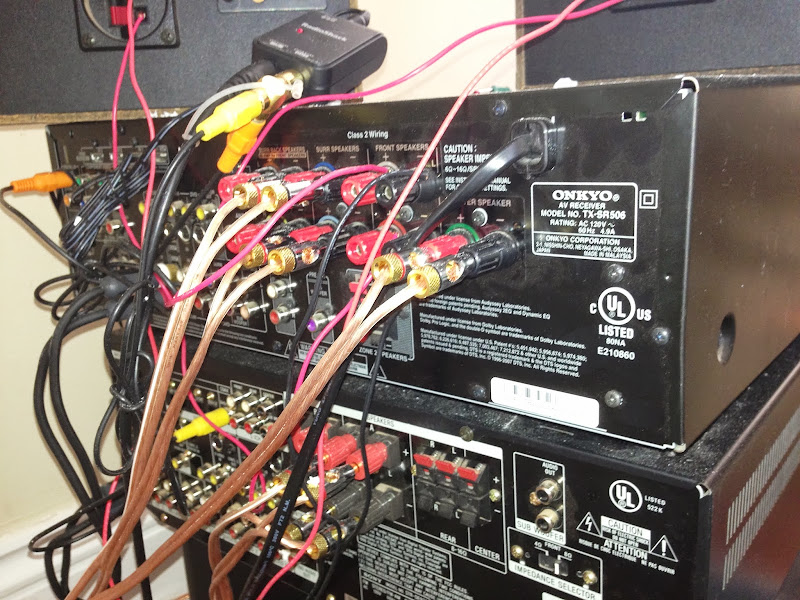 Here, you can see the converter that changes the optical audio into digital coax connected to a y-splitter to feed the two receivers. I had originally hoped to just use an optical splitter but could never get it to work and the optical coverter/splitter was significantly cheaper than getting a powered optical audio splitter.

As mentioned above the top receiver drivers the living room setup which is 5.1. The bottom receiver drives the home audio distribution which is 2.0. The speaker outs on this receiver connect to a NXG Technology NX-VCH8 150-Watt Volume Control Distribution Hub which splits out into the two other zones. 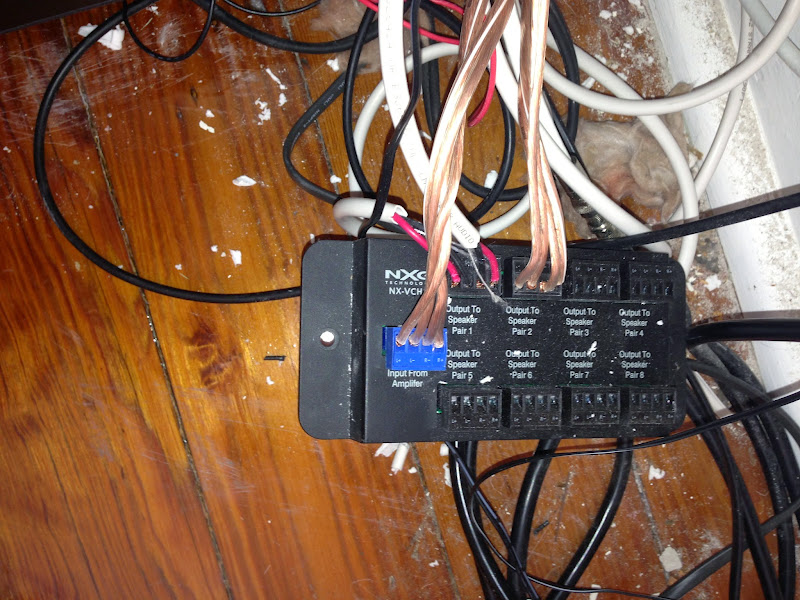 Right now I only have two zones, but as you can see I have space for more, just need to run more wires. . The first zone is for the kitchen. The wires for this zone run under our house and up into the kitchen. The other zone goes to the master bedroom which runs up the wall and into the attic crawl space where the ceiling speakers are mounted. (I live in a traditional New Orleans Camel Back Shotgun, link to Wikipedia page for those unfamiliar with this layout https://en.wikipedia.org/wiki/Shotgun_house)

Here is the wall plate behind the receivers where all the in-wall speaker wires are terminated. 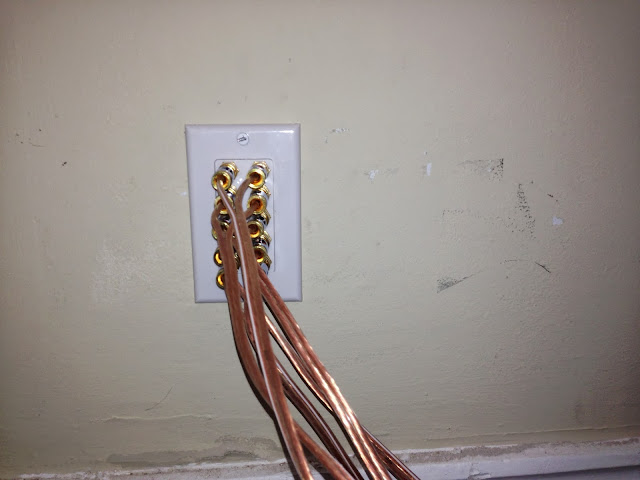 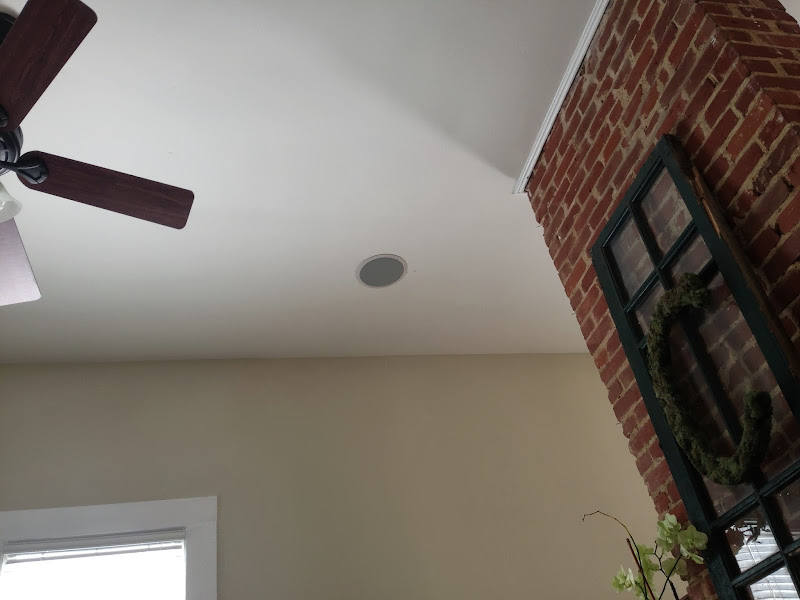 This is a picture of the rear right surround the other is mounted over the sofa on the left.

And now to look at what is behind the TV: 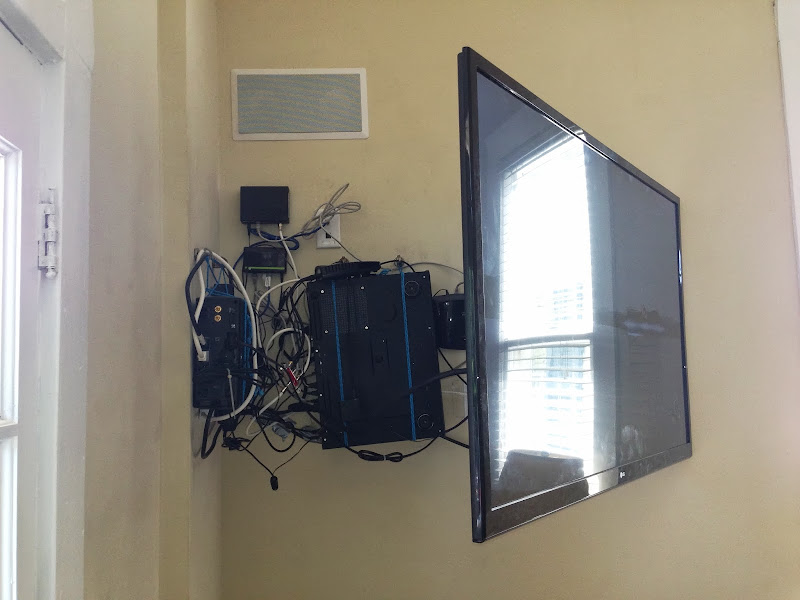 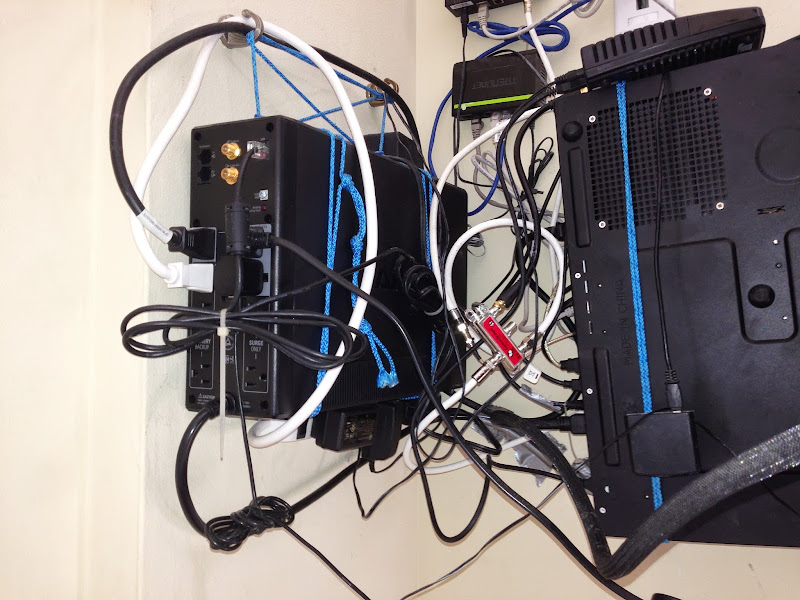 The cable modem, network switch (TRENDnet TEG-S5g), router (linksys WRT160N, running dd-with regard to) and two power strips are all mounted to the wall with screws in mounting holes on the back of the devices. The UPS (APC Back-UPS BX1000G) and HTPC are held on the wall using climbing rope attached to drywall hooks. The hooks are each rated at 30 lbs. in drywall and have felt very secure since the equipment has been mounted (roughly 3 months now). 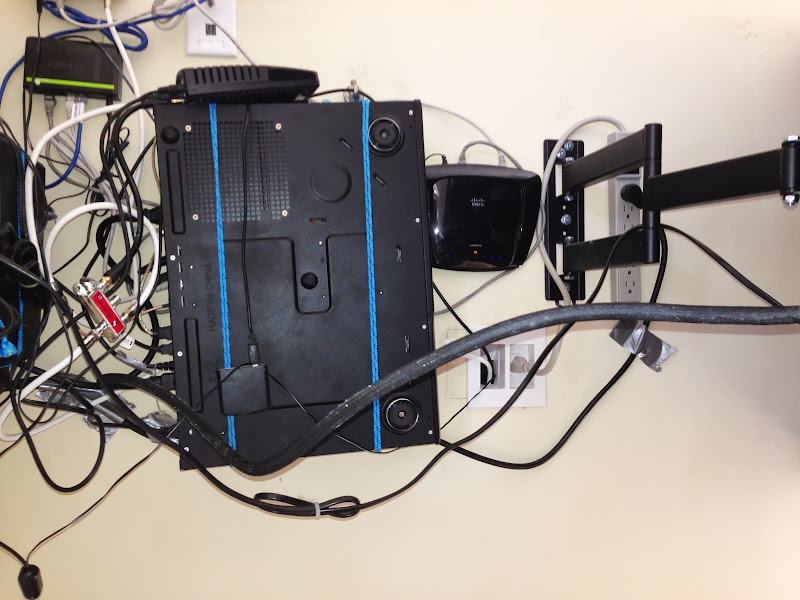 The tuning adapter just rests on top of the HTPC. I would like to mount it to the wall as well, however, it does not have any mounting holes and it seems to rest relatively well where it is. In this picture you can see the TV wall mount as well as the sewell wall blade I installed to transmit power as well as the cable and audio cords in the wall. The wall plate above the HTPC is an Ethernet port that is connected to a second router (Cisco Linksys M20 Valet Plus – running dd-with regard to and used as a switch / wireless access point) in the guest room/office / soon to be nursery (wife pregnant with first). This router is connected to the server and a macbook pro.

The server and second router: 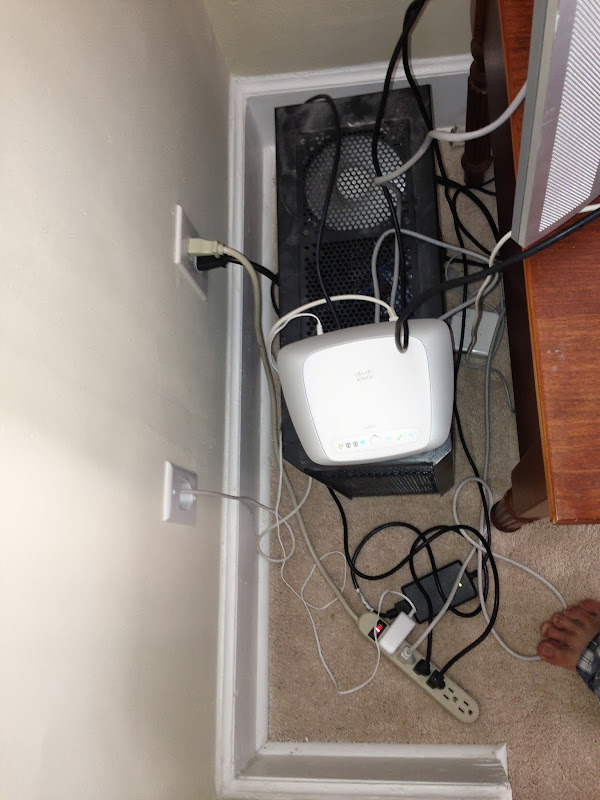 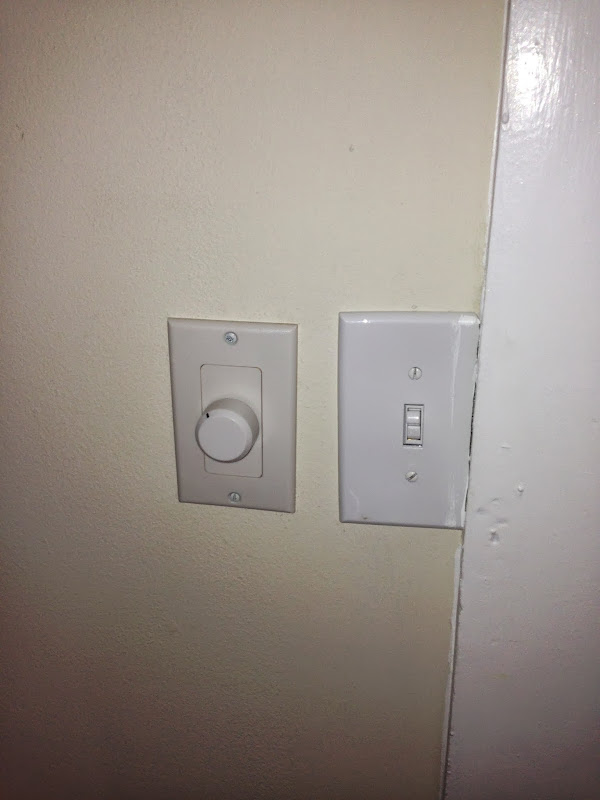 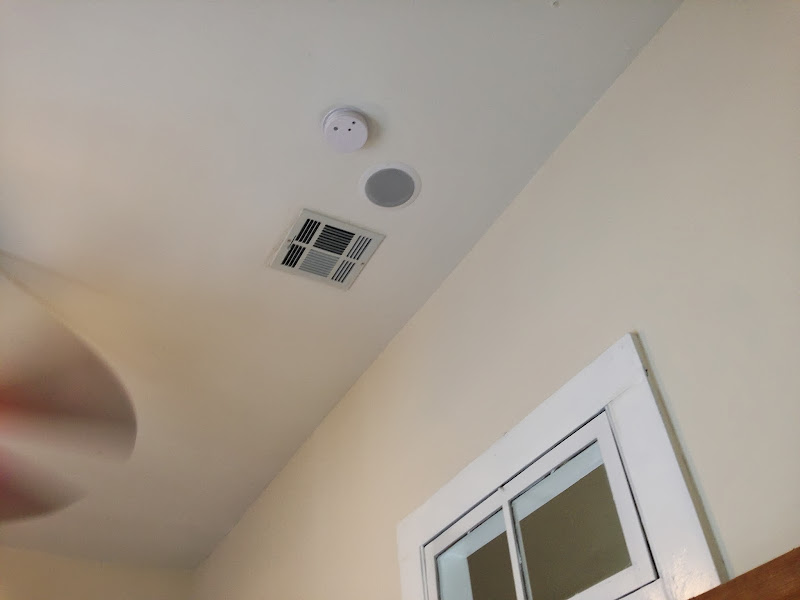 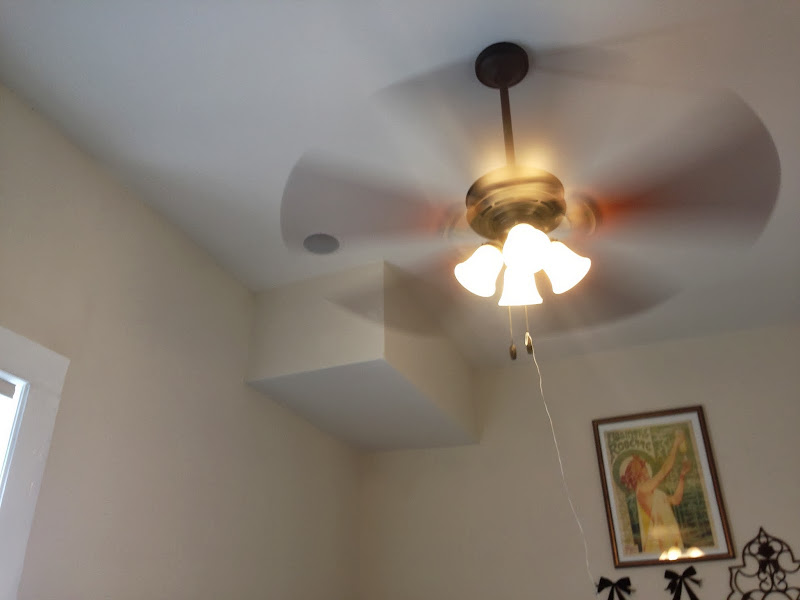 Second, the kitchen zone which consists of two standard bookshelf speakers on top of the cabinets attached to its own impedance matched volume control(same model as the master bedroom). 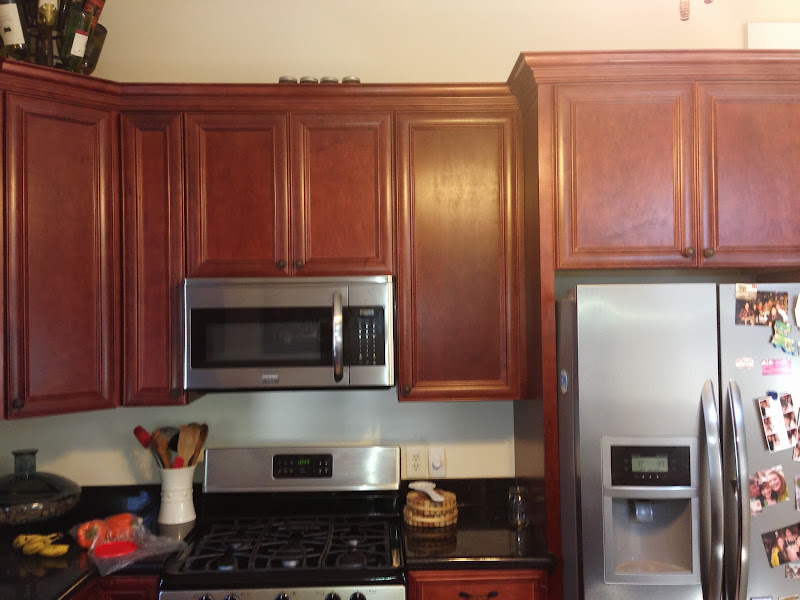 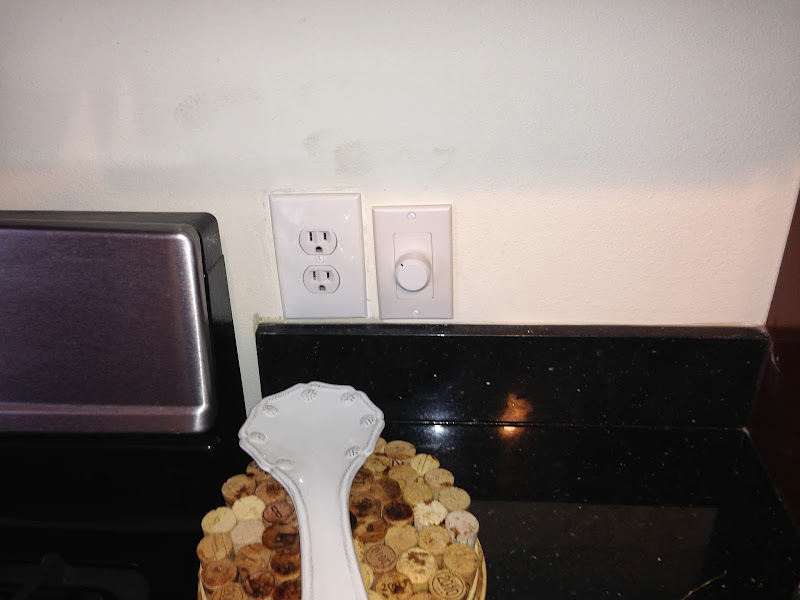 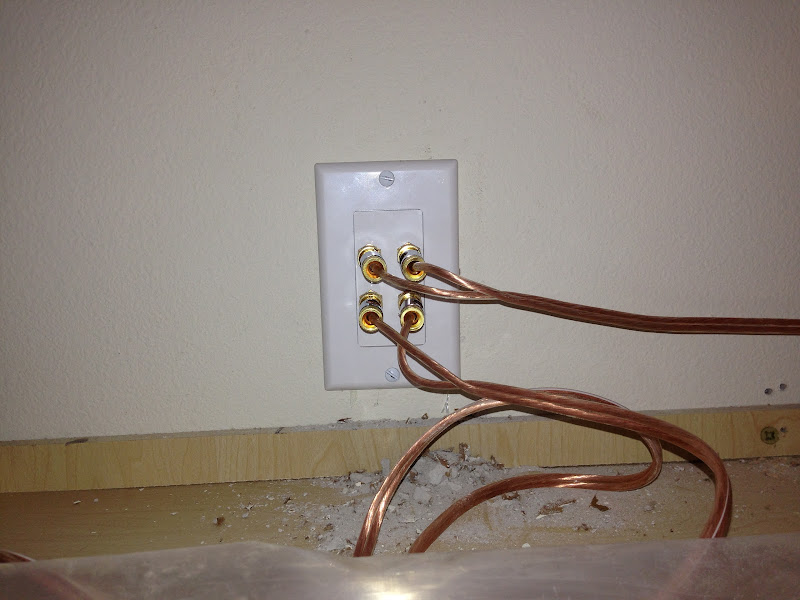 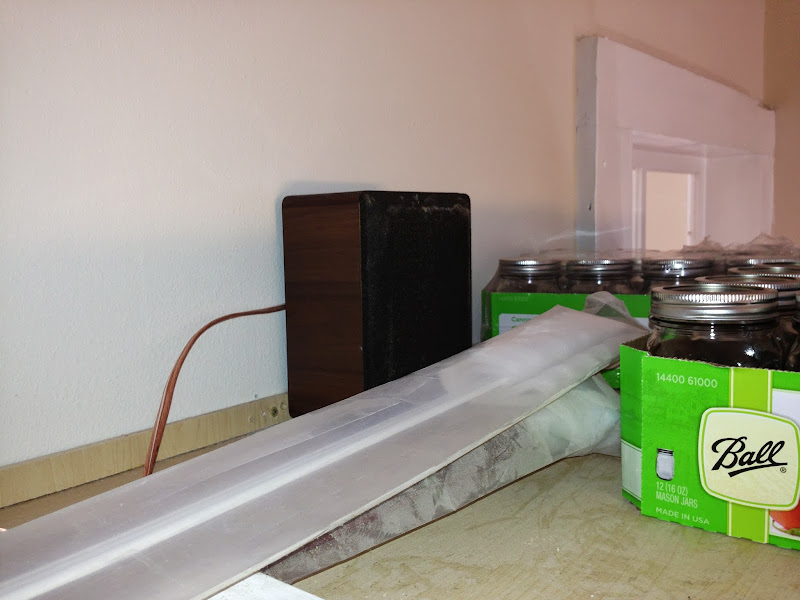 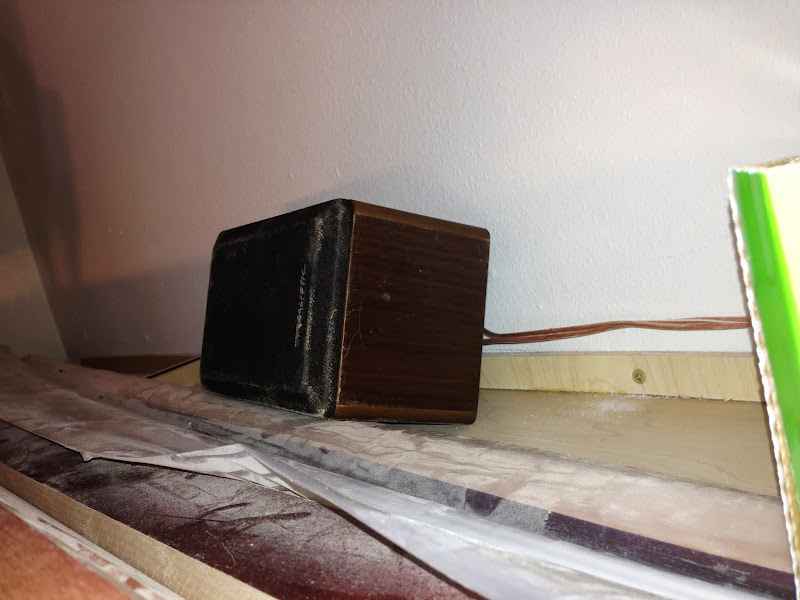 Well that in a nutshell is the new setup. I still use the same harmony Logitech 700 remote to control everything. 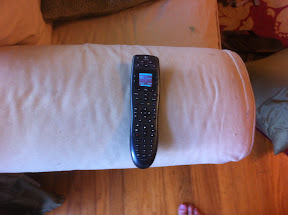 While our cat Hobo misses his favorite sleeping spot on top of the television, he seems ok with his new favorite spot and his new friend izzy that we rescued just before tropical storm issac hit new Orleans back around labor day… 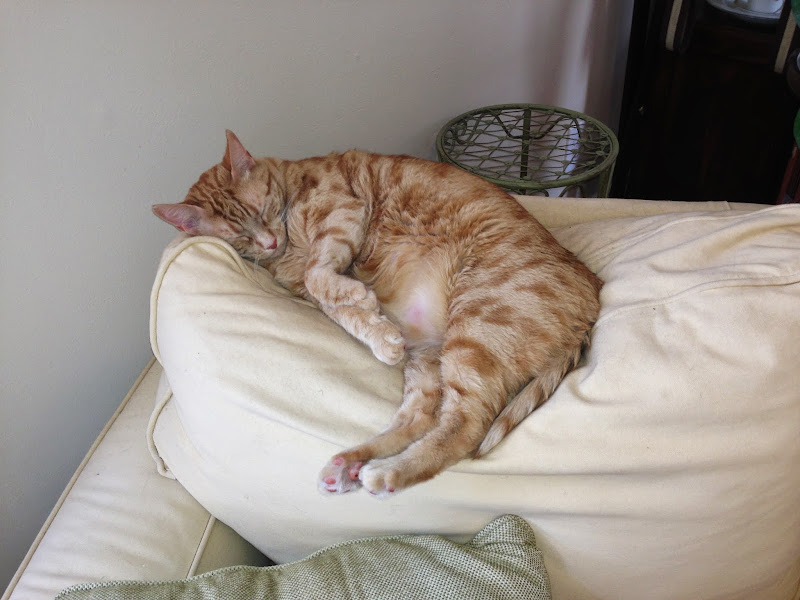 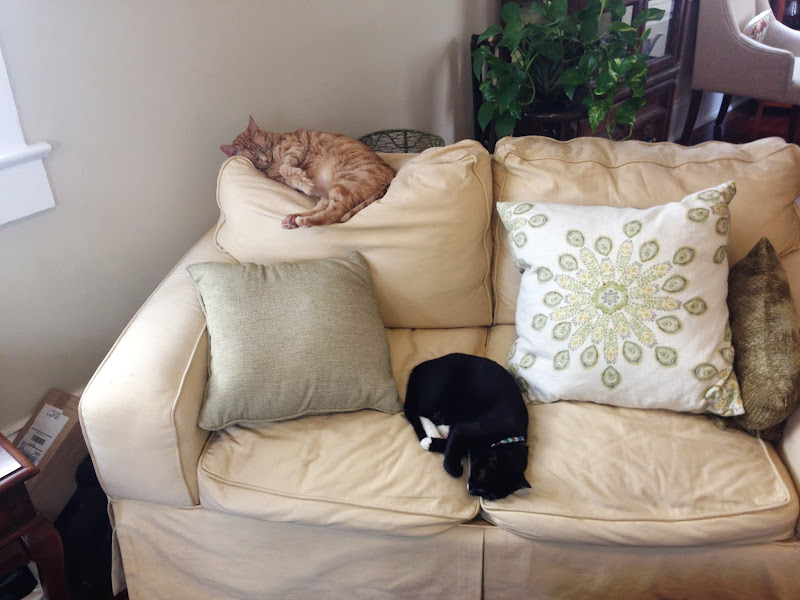 Please feel free to comment and provide suggestions below.

My next big project is to wire the backyard with two speakers and I hope to someday turn it into a separate outdoor theater. But that will have to wait for a future day and another post…. 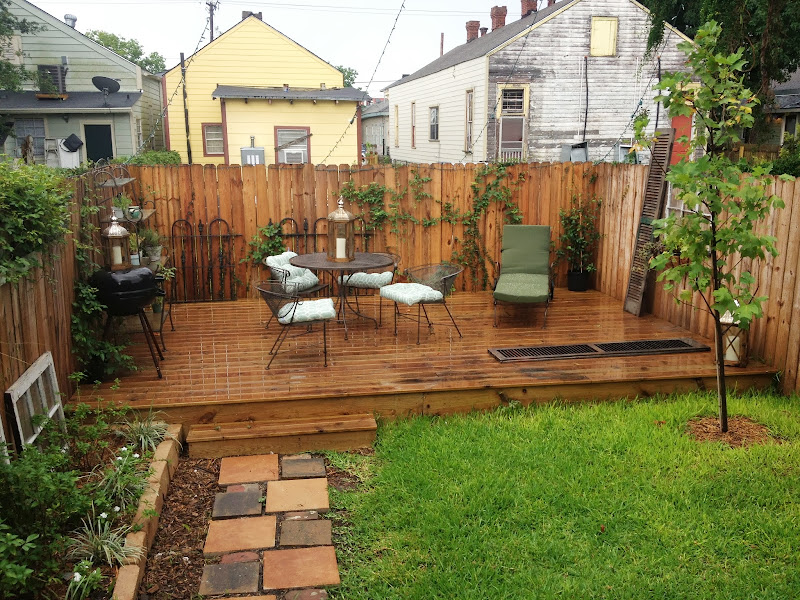 Nice setup! I'm impressed with how you managed to get all that equipment hidden behind your TV! Keep us updated! I love seeing how others do it!
Top
Post Reply
2 posts • Page 1 of 1
Powered by phpBB® Forum Software © phpBB Limited.
This website is not affiliated with Microsoft. All Windows and Media Center logos and trademarks are the property of Microsoft Corporation.